The goal for your program is to safely land the “Mars Lander” shuttle, the landing ship which contains the Opportunity rover. Mars Lander is guided by a program, and right now the failure rate for landing on the NASA simulator is unacceptable.

Note that it may look like a difficult problem, but in reality the problem is easy to solve. This puzzle is the first level among three, therefore, we need to present you some controls you won’t need in order to complete this first level.

Built as a game, the simulator puts Mars Lander on a limited zone of Mars sky. 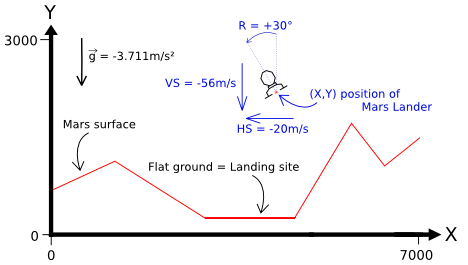 For this level, Mars Lander is above the landing zone, in vertical position, with no initial speed.

There is a unique area of flat ground on the surface of Mars, which is at least 1000 meters wide.

Every second, depending on the current flight parameters (location, speed, fuel …), the program must provide the new desired tilt angle and thrust power of Mars Lander:

For this level, you only need to control the thrust power: the tilt angle should be 0.

For a landing to be successful, the ship must:

Remember that this puzzle was simplified:

For this first level, Mars Lander will go through a single test.

Tests and validators are only slightly different. A program that passes a given test will pass the corresponding validator without any problem.

The program must first read the initialization data from standard input. Then, within an infinite loop, the program must read the data from the standard input related to Mars Lander’s current state and provide to the standard output the instructions to move Mars Lander.
Initialization input
Line 1: the number surfaceN of points used to draw the surface of Mars.
Next surfaceN lines: a couple of integers landX landY providing the coordinates of a ground point. By linking all the points together in a sequential fashion, you form the surface of Mars which is composed of several segments. For the first point, landX = 0 and for the last point, landX = 6999
Input for one game turn

Output for one game turn